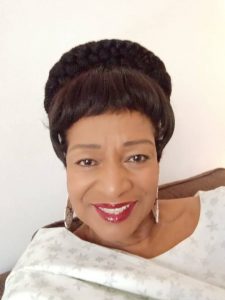 The AMN 2nd Vice President Brenda Joyce is a Business Development, Public Affairs and Government Relations Specialist with more than 30 years experience representing multi-national corporations and foreign governments. She is also a Registered Federal Lobbyist and has served domestic and foreign clients.

Upon the invitation of Nelson Mandela, Brenda had to relocate to South Africa and assist with the development of the minerals industry and the inclusion of all of South Africa’s people into the industry.

Brenda Joyce has since then assisted in product development, establishing marketing and distribution networks in the United States and Europe for Gold, Diamond and Tanzanite products manufactured in the Republic of South Africa.  In 1996, Mayor Richard Guilani of New York City named her the “International Businesswoman of the Year”. She is the founder of DAGOSA and has developed expertise and proficiency in the marketing of high karat gold alloy, diamonds and diamond jewelery, platinum jewelry, gold coins and coin jewelry and is extremely effective in opening non-traditional  consumer markets in the U.S., Europe and Asia for gold and diamond products.  She also founded the first Black owned high-end gold and diamond jewelery shop in South Africa, called “First World-The Jewelery of Africa”,  housed in the lobby of the Hyatt Hotel in Rosebank, Johannesburg. She developed the first Mandela Gold Coin, which is still being sold by the Reserve Bank of South Africa.

She holds a bachelor degree in English and Music, MA in Mass Communications, and she has graduated from the Advance Management Institute Program at Harvard Business School, a program designed to prepare Senior Corporate Executives for leadership positions in the business world. She is certified by the Gemological Institute of America ( GIA) in Diamonds, Diamond Grading, Gold and Precious Metals ( with Honors),  and since moving to South Africa  certified in rough diamond grading, and as a Chartered Marketer.  She is also certified by Wits University in Management of Mining and Minerals Resources.

Miss Joyce  worked for Gulf Oil Corporation in 1970 and became known as a person with an extraordinary commitment to the development of Black people and registered as a Federal Lobbyist – the First African American Lobbyist in the history of the Oil Industry. She proceeded to represent Gulf Oil Corporation on the Inaugural Committee for President Richard Nixon serving as coordinator for an Official Inaugural Event, “The American Heritage Reception” held at the prestigious Corcoran Gallery.  Her winning style earned her the coveted honor of being selected by the Chair of the Inaugural Committee to host the First Family at this stellar event.  The Republican Party awarded her the coveted “Meritorious Service Award” for her activities on their behalf.

She has consulted for Governments of Nigeria, Liberia, Panama, Israel and Korea.  She has  completed investment projects in the United Kingdom, France, Italy, and Luxembourg.    Miss Joyce served as liaison officer between the host government and the White House for the Official state Visit of President Jimmy Carter to Africa.   She provided Diplomatic and Public Relations coordination for the annual meeting in Monrovia, Liberia of the Heads of Africa Countries, of the Organization of African Unity (The OAU).  She has also coordinated successful Trade Missions for Chambers of Commerce, both domestic and foreign.

She has been recognized by the National Republican Party, The Commonwealth of Pennsylvania, The Reverend Jesse Jackson and Operation Push, the Public Relations Society of America, The National Council of Negro Women and the Korean Association of New York.  One of her crowning achievements is the honor of being named “Outstanding Young Woman of America.”

Miss Joyce is an accomplished Coloratura Concert singer, classically trained, and performs in seven languages including Portuguese, Hebrew and Yiddish, before worldwide audiences.

In 2003 Miss Joyce was invited to The Republic of Ghana to serve as a Consultant to Ashanti Goldfields Company. She later became a consultant to the Ministry of Forestry and Mines,  serving through the terms of three Ministers. Currently Miss Joyce is Founder/CEO of Allied Mining Ghana, a Company committed to Socially Conscious Mining and Development of Indigenous Communities in Ghana .She is involved with branding, marketing, product development and wholesale and retail distribution of beneficiated precious metals and gem products of South Africa and West Africa, where she is involved directly and through a network of associated companies  in Ghana, Liberia and Sierra Leone.  She is a certified Gemologist, receiving recognition and certification from the Gemological Institute of America.

Miss Joyce serves on the Board of Advisors for the University of Cape Coast Centre For African and International Studies, and is on the Board of Directors of the Accra Mining  Network, and The Ghana Heritage and Cultural Trust. She is also a member of  the Board of Governors of AUCC.  She is  past President of the African American Association of Ghana. She has received the Honor of Ghanaian citizenship, and holds passports of The United States of America and The Republic of Ghana. Presently Miss Joyce has been granted the sole and exclusive rights to manufacture and market medallion products in partnership with the Govt of Ghana, the first of which will be THE YEAR OF RETURN, a 24kt gold medallion, followed by a BEYOND THE RETURN medallion. To implement this Project she has established African Heritage Precious Metals Ltd.