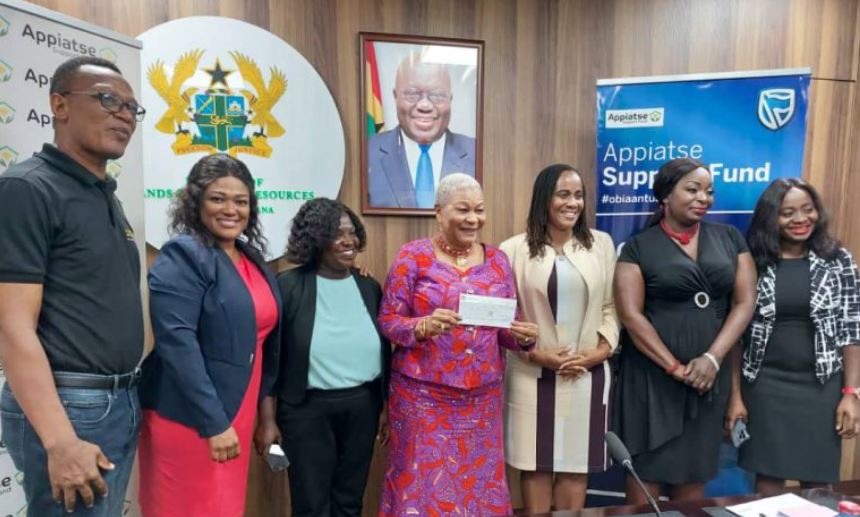 The Appiatse Support Fund has received donations from the Accra Mining Network (AMN) and Political Zone, a Canadian Voluntary Organisation as their contributions towards the reconstruction of the Appiatse community.

A donation of GHC6,000 was made on behalf of the Accra Mining Network by the General Secretary Madam Ellen Korley at a brief event on Wednesday, 25th May, 2022.

Presenting the donation, Madam Ellen Korley said they deem it a noble act to give and so upon hearing the explosion incident at Appiatse, they took it upon themselves as a Network of professionals to contribute a token to support the people of Appiatse.

Mr. Justice Amekudi, the Organising Secretary of the AMN also added his voice and suggested to the Support Committe that just as the committe is volunteering to solicit funds, a communique should  be sent out to various mining institute to solicit volunteers for the reconstruction project.

Mr. Hopeson Adorye, the leader of the delegation from Political Zone presented an amount of GHC5,000 as their widow’s mite towards the rebuilding and rehabilitation of the Appiatse Community.

In a remark before the presentation, Mr. Adorye said their donation is a complication of contributions from people from all walks of life on Facebook who were informed about the incident through their lead Volunteer, Mr. Felix Appiah Korang, a political commentator based in Canada.

He added that “our contribution may be small, but I believe that the quantum does not really matter, what matters is the hearts it comes from and these people who gave were really touched to give.”

Receiving the donation, the Chairman of the Committee, Rev. Dr. Joyce Aryee noted the suggestion from the AMN team and assured that she will ensure the implementation team takes it up to help reduce cost of construction.

She disclosed that the Fund has been able to raise about 40million cedis, however the amount is not enough to reconstruct the entire community saying “we wouldn’t want to start and not complete, that will not be diligent of us and so we will continue to solicit for the funds until we have enough”.

She also mentioned that latest by June this year, the Committee will put out new strategies to solicit more funds for the Reconstruction Implementation Committe to start their work.

She also called on Ghanaians and others in the diaspora to give generously saying ” just as our tagline suggests, Obiaa ntua bi and when we say Obiaa, we mean Obiaa so regardless of who you are or how much you can give, we are always ready to receive it for this worthy cause”

Mrs. Antoinette Tsiboe-Darko, a member of the committee also gave a heart appreciation to the donor companies saying “it’s been a while we received donations so for us to receive two in a day, gives us hope to keep on working. We are still putting together strategies to solicit for more and for you to come on your own accord without us putting out our strategy means a lot to us. Thank you.”