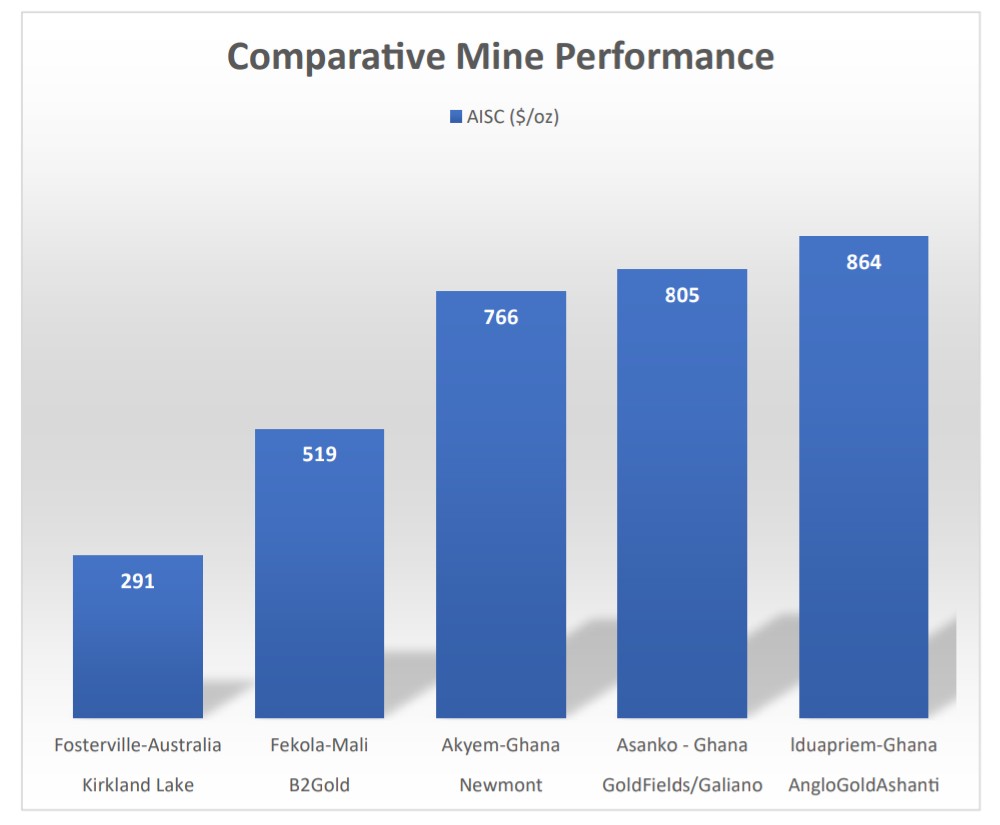 Using the “All-In-Sustaining-Cost” (AISC) which is a mining metric that estimates all direct and recurring costs required to mine a unit of ore, three best performing mines in Ghana appear on the West African Mining Province: they are Newmont Akyem Mine, Asanko Gold Mine and AngloGold Ashanti Iduapriem Mine.

The World Gold Council has encouraged the use of AISC since 2013, and the use of the “all-in sustaining costs” and “all-in costs” metrics has been widely adopted by gold mining companies as part of their overall reporting disclosure. These non-GAAP metrics have helped provide greater clarity and improve investor understanding. All-In Sustaining Costs is computed using cash costs, including by-product credits and sustaining capital, in addition to exploration expenses as well as general and administrative expenses. It does not include project capital, dividends, taxes nor interest payments.

During the first quarter of 2019 for example, the average all-in sustaining costs (AISC) incurred by gold miners across the globe rose slightly over the previous quarter, from $988/oz in Q4 2018 to $1,000/oz in Q1 2019. This $2 difference was an indicator that mining companies were mostly able to keep costs under control. With only $291/oz according to Mines and Metals (or 315/oz according to mining.com), Kirkland Lake’s Fosterville mine in Australia was enviably the world’s best AISC performing mine, or the lowest cost gold operation in 2019. It is worth noting however that six of the ten lowest AISC mines globally in 2019 are in Russia.

Gold mining is a global business with operations on every continent, except Antarctica, and gold is extracted from mines of widely varying types and scale. Numerous extraneous factors based on mine location contribute to AISC, example is cost of energy. Akyem, Asanko and Iduapriem made the list of the best 10 low cost mines in West Africa. The Accra Mining Network is applauding these three mines for synthesizing the plethora of decisions in managing the resources available to produce each ounce of gold at the relatively minimum cost possible.