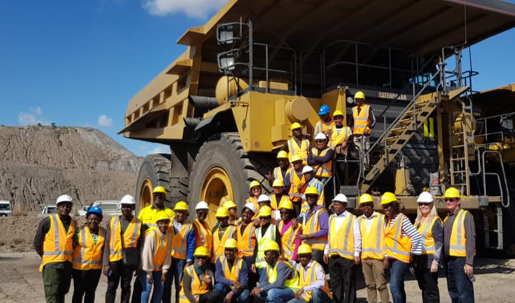 Government is committed to indigenizing mining to ensure the country benefits fully from the sector, the Minister of Lands and Natural Resources, Samuel Abdulai Jinapor, said this yesterday.

To this end, he said the government, through the Minerals Commission, was embarking on a number of reforms that would create enough room for the Ghanaians to fully participate in the mining sector.

“While we are insisting that no one should engage in illegal mining, I think it is also our responsibility and the responsibility of the government to provide the conducive environment and the proper and necessary framework with which we will have the moral authority to insist on compliance”.

“I am very excited that the Chief Executive Officer (CEO) of the Minerals Commission has outlined the measures we are putting in place to sanitize the industry,” he said.

Mr. Jinapor, who was taking his turn at the bi-weekly Minister’s briefing organised by the Ministry of Information in Accra yesterday, said it was the desire of the President, Nana Addo Dankwa Akufo-Addo, to see Ghanaians assume the commanding height of mining in the country.

“The President is big on the indigenization of the mining sector in the country. When you listen to the presentation, quiet clearly, the old adage of mining is gold mining… and truly gold mining is a lot of money.

“We are talking about billions of dollars so it is government’s responsibility to create the framework that ensures that we get the best out of it,” he said.

Mr. Jinapor noted that the reforms were targeted at improving the sector and not to destroy anybody’s business.

For his part, the Chief Executive Officer of the Minerals Commission, Martin Ayisi, said the Commission had spent $10 million to procure initial 100 mercury-free gold extraction machines for small-scale miners.

He said about 20 of the machines were expected to be delivered in two weeks, with the remaining 80 coming in by March next year.

Mr. Ayisi explained that the machines would help eliminate the use of mercury in processing gold in compliance with the Minamata Convention.

The Minamata Convention on Mercury is an international treaty designed to protect human health and the environment from anthropogenic emissions and releases of mercury and mercury compounds and also address the direct mining of mercury, its export and import, its safe storage and its disposal as waste.

“Each machine is purchased at a cost of US$ 113,000 and the miners are supposed to pay it on work-and-pay basis within a year,” he said.

Mr. Ayisi outlined various policy reforms being undertaken by the Commission to regulate and manage the country’s mineral resources and particularly sanitized the small-scale mining sector.

He said as part of the reforms, the Commission had introduced electronic licensing of small-scale miners, digitisation of the Commission’s manual records and online application of mining concessions.

In addition, he said the Commission had commenced with the installation of tracking devices on mining equipment, recruitment of additional 30 mine inspectors and construction of new district and regional offices to ensure efficient delivery of services.

Mr. Ayisi stated that his outfit had, in collaboration with the sector Ministry, developed an operational manual to guide the operations of Community Mining Scheme in the country.

That, he said, would ensure uniform operation of all miners working under the Government’s Community Mining Scheme across the country and to curb the indiscriminate degradation of the environment.

AMN
"While we are insisting that no one should engage in illegal mining, I think it is also our responsibility and the responsibility of the government to provide the conducive environment and the proper and necessary framework with which we will have the moral authority to insist on compliance" -- Minister of Lands and Natural Resources, Hon. Samuel Abdulai Jinapor.
Share this article:
©  - Accra Mining Network : : crafted  in Accra, by #webathand     AMN Staff Mail
Start a live chat
Need assistance ?